I’ve had the pleasure to meet a local gal named Phyllis. She recently brought me a few items to sell for her on eBay.  The first item is a pipe in the original custom case.  It’s signed and dated: 1974 by Ismet Bekler. This style is a Meerschaum Pipe.

Personally I’ve not heard of these before which is another great reason why I love what I do because of the learning opportunities like this. Researching products that are unfamiliar helps build my knowledge of seeking out the goods for selling on eBay.
My first search always starts with Terapeak and Worthpoint. Worthpoint allows me to dig even deeper and further back to items that have sold longer than 90 days. Terapeak only goes back 90 days while Worthpoint goes back years!  Terapeak is perfect for “current market values” while Worthpoint is perfect for identification and past selling points.  I love using both of these research tools. Especially for the type of items that my new friend Phyllis has brought me.
The highest selling pipe I found on Terapeak sold for $250.00 and it was what they called “Well Seasoned” with frontier face: FYI Worthpoint showed the listing that sold for the highest was on March 11, 2014. It was a set of five “Sherlock Holmes” pipes that were all new in original packaging sold for $1,250.00 on eBay. (see photo below from Worthpoint) :

FYI, I also found a French Poodle pipe sold for $167.50 in 2013!
The second item from Phyllis is even more interesting than the pipe and it too had a name I’ve not heard of: Cornelius Girandole. This name is most famous for the design of Candleopra type candle holders that had crystal prisms hanging from them. From my research, these usually came in sets of threes.   I found one identical to the design of ours on Worthpoint: The current market value has dropped considerably on these with only a few sold in the last 90 days. One person was asking $189.00 for a set of three (they were different than our pattern) but they did not sell.  I do see they have relisted them again on eBay:

Our situation is a bit different from these listings because we only have the center figure on the marble base.  No holders included. Which means our value will be even less.  The only attraction for this type of item is for the serious collector or someone that would be willing to electrify it and transform it into a new lamp or a newer type of “art” piece.

With even more research, it seems the frontier man on this figurine has a name of “Natty Bumppo” which has been identified from Wikipedia: Natty Bumppo, the child of white parents, grew up among Delaware Indians and was educated by Moravian Christians.[1][2] In adulthood, he is a near-fearless warrior skilled in many weapons; chiefly the long rifle. He is most often shown alongside his Mohican foster-brother Chingachgook.
What we do have going for us is the markings and the story behind the original design which we can borrow from the Worthpoint description that actually came from an Auction House.  Items like this are a “roll-of-the-dice” so we need at least two people who really want it!  **rubbing my hands together now and blowing on the dice** Starting the auction at $24.99 –

eBay item # 401139632216. SOLD $24.99 with only 1 bid.
The last item we have today is a candy dish from Waterford Ireland. It has the original sticker in place. However it has a little chip on the edge. Such a bummer.  Waterford crystal was not selling very well on eBay the last time I checked and I chip can make things a bit worse so, we will see. Let the researching begin starting with Worthpoint to see if I can identify the design.
I couldn’t believe it! The very first item that pulled up in Worthpoint was an identical match to our candy dish! How lucky was that? But the luck was not in the sale. It only sold for $15.00 on eBay in May 2014 and it had no chip. Darn!  However, I did find one on Terapeak that recently sold for $59. at auction on eBay. So there is hope!  Starting the bid at $4.99 to spark some interest.

Feel free to check back to see what the items sold for or if there were no sales then the items will be relisted and the new item numbers will be posted. This process will continue until everything is sold.
Happy eBay selling! 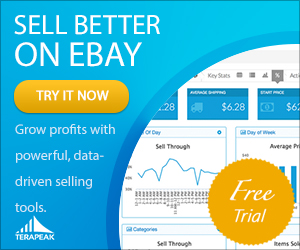